All posts in Success Stories 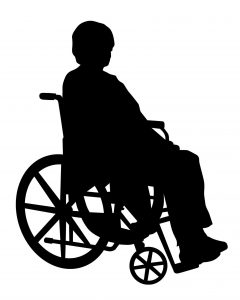 After Sandy, Patty was forced to elevate her house by more than 8 feet. She has a disability and, without assistance, would physically not have been able to get inside her now, sky-high home. Thankfully, one of our Disaster Case Managers helped Patty through the RREM program and got a dumbwaiter approved. Now Patty has the freedom to come and go as she pleases without relying on someone else for help. “Your organization acted quickly, efficiently and was there for me when I needed help,” she says. “I attended one of your seminars…and today it all paid off.” 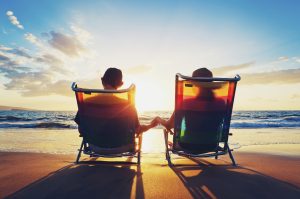 Jane and Don planned an idyllic retirement in a home that banked the bay in Ocean County. Unfortunately, the proximity to that gorgeous water quickly turned disastrous when Sandy floodwaters entered and destroyed their ground-floor home. Jane and Don, who has difficulty walking due to a chronic illness, were now faced with the daunting task of rebuilding and elevating. They were at their wits end before coming to OCLTRG and meeting with our Disaster Case Managers. After several months, OCLTRG was able to help Don and Jane acquire the funding necessary to return home. Now, their home is elevated, Don has a lift that helps him inside and their retirement finally looks bright again! 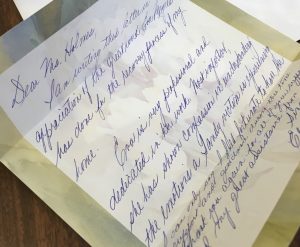 Elizabeth was ready to give up before meeting, Eva, Our Disaster Case Manager, who guided her through a mess of paperwork and provided extensive emotional support. Elizabeth had been displaced for several years before Eva helped her acquire additional funding vital to rebuilding her home. Elizabeth was so impressed with Eva’s commitment that she wrote a letter expressing her gratitude for Eva’s “compassion in understanding the emotions of a Sandy victim is experiencing.” Now, Elizabeth no longer has to worry about repairing her home and can focus on rebuilding her life. 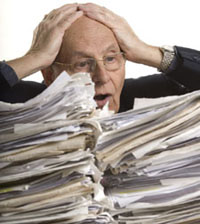 Elise and Richard had been living in Ocean County for 16 years before Sandy substantially damaged their home. Suddenly, they were massively overwhelmed by paperwork and incredibly stressed about elevating their house. Luckily, one of our Disaster Case Managers helped them navigate the grant application process, provided them with accurate, current information and was with them every step of the way. “Our DCM served as a mediator between us when information overload has caused us to sometimes hear different things from the same meeting,” says, Richard. “She knew all the right questions and advised us on the appeal process for RREM.” OCLTRG was able to obtain rental assistance for Elise and Richard and offered financial assistance where needed.

Our client, David, thought he’d be able to manage his recovery entirely on his own but quickly realized he “needed the help and guidance of the extraordinary people at OCLTRG.” We helped David organize his paperwork in a useful way, found him a builder and filled in financial gaps required for him to return home. Mostly, David appreciated our knowledge about the recovery process and the ability to connect him with various resources. “Strong independent people start out trying to make sense of all that happens and manage themselves in difficult times, but soon realize it’s impossible.”

Matt requires oxygen and struggles with regulating his own body temperature and can’t tolerate cold or hot weather well. Unfortunately, he was forced to elevate his home and walking up the stairs in varying temperatures was a near herculean task. OCLTRG guided Matt through the RREM process and provided him with $4,000 toward the construction of an elevator in his home. “This will give me a safe way to move between floors without the fear of not having enough oxygen. I will be forever grateful to your charity for your help, understanding and support.” 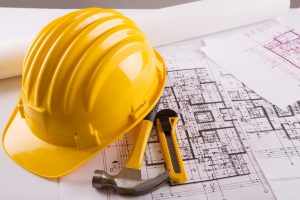 “When we came to OCLTRG it really started to feel like someone really understood what we have been through and it was humbling,” says our client, Lauren. She and her children had sustained substantial damage during Sandy and were desperately looking for guidance. Through the hard work of our Disaster Case Manager, Habitat for Humanity took on Lauren’s case. This ultimately provided her with a new roof, a new wall in her garage and mold remediation to ensure her family wouldn’t get sick from toxic mold. “I am excited to say that our house is becoming safe and back to normal and it is beyond anything I could have ever, ever imagined!” 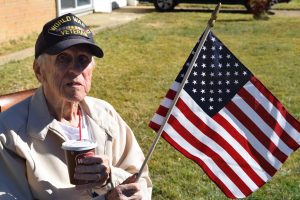 John, a 90-year-old WWII veteran, had been living in a house seriously damaged by Sandy for a year and a half before receiving assistance. It wasn’t until some friends realized the poor quality of his living condition that he finally got help from OCLTRG. Through some hard work, we were able to provide him with a safe, sanitary and secure living situation. Then, shortly before the third anniversary of Sandy, we were able to welcome him home! While there, several people instrumental in helping John joined us in forming a large circle around his newly raised American flag. As we came together to bless John’s home, the flag billowed softly in the breeze; reminding us of John’s service and legacy!

Since conception, OCLTRG has provided funding to 748 households with senior citizens!

Our client, Anne, is an 83-year-old disabled female veteran of the Airforce. She taught for six years during the Korean conflict and suffered severe hearing loss while overseas. In the last few decades, Anne lost her husband, battled cancer and, most recently, suffered serious damage from Sandy. She was forced to rebuild the inside of the home and elevate it by eight feet. This made it nearly impossible to access the front door and left Anne in a difficult situation. She needed a shaft to accommodate a 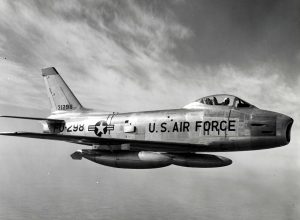 vertical lift but could not afford it.

Her son, a school teacher, has done everything humanly possible to get his mother back home. He’s sold several of his belongings, some gifted to him 20 years ago by his belated father, just to pay for his mothers outstanding bills. Despite these selfless efforts, they still needed help with two things: affording a shaft to accommodate the vertical lift and paying an overdue debt to a plumber who worked on her ruined home.

OCLTRG Adopt-A-Family Program was able to find donors to contribute toward these last few items so that Anne could return to the home her father built 50 years ago. Since conception, OCLTRG has provided funding to 85 households with veterans. 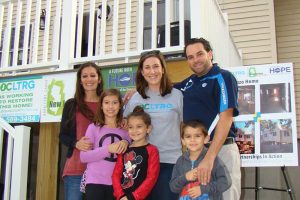 In a single night, the Lorenzo’s watched as their family home was utterly destroyed by Superstorm Sandy. After spending all of their insurance money on elevation, they were left with nothing more than the gutted, empty shell of their former home. It bore no resemblance to the place that lovingly housed their three children only weeks prior. The Lorenzo’s were at their wit’s end when they came to OCLTRG and met with our disaster case managers. Through OCLTRG’s partnership with a Future With Hope we were able to restore their family home!

Unfortunately, not every family affected by Sandy has been able to return home and this has caused severe strain on children. In fact, according to The Sandy Child and Family Health Study, 42% of children in minimally damaged homes are frequently depressed, anxious or have difficulty sleeping. This is largely due to extended construction projects.