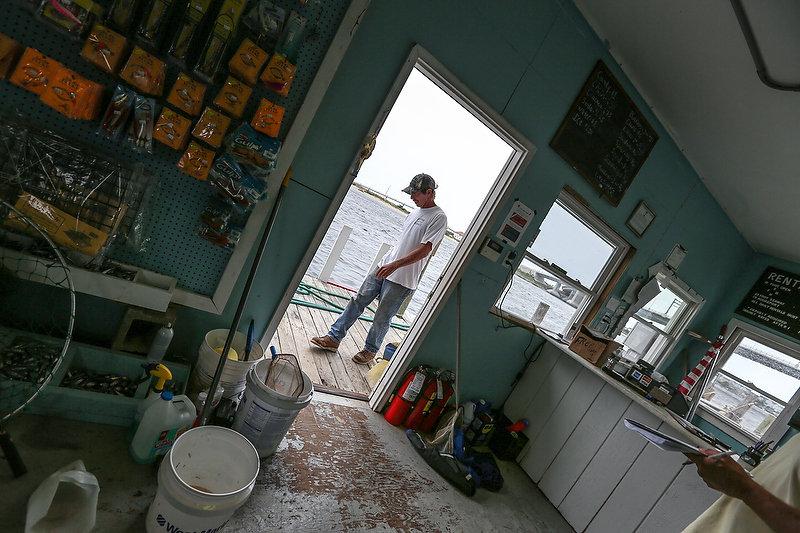 Today, Jon Bon Jovi is hosting a $1,000-a-plate fundraiser for Hillary Clinton in his French Chateau overlooking the Navesink River. It’s a mile from Jyll Jakes’ neighborhood in Sea Bright, where every other house remains boarded up.

“It’s a still mess down here. I think people have forgotten how bad it is,” said Jakes, who credits the Salvation Army, not the state, for “keeping me alive.”

Tomorrow, Gov. Chris Christie will announce his candidacy for President in Livingston, a town not far from the meandering Passaic River, which keeps Fairfield, Wayne, Lincoln Park and Little Falls on red alert after a day or two of heavy rain.

In the coming months, it will be interesting to see if Clinton or Christie or any other candidates make fixing FEMA a campaign issue.

They should. The numbers – and news – reminds us that cataclysmic flooding can hit anybody.

I think he’s only vulnerable among people who are still out of their homes or slow to go back.” — Patrick Murray.

First, the numbers. Flooding is America’s No. 1 natural disaster. Nearly 40 percent of the country’s population live in coastal communities – about 130 million people, give or take.

The NFIP webpage flatly states “everybody lives in a flood zone.” Only the degree changes; 5.3 million properties in 22,000 communities are in the FEMA-backed NFIP.

All 50 states experienced major flooding events in the last 12 months, from the mudslides in western Colorado to the inundation of Houston.

What does it all cost? FEMA paid out $16.3 billion in flood insurance claims for Hurricane Katrina, and $8 billion for Sandy. The payout for Hurricane Irene, which overflowed North Jersey’s rivers in 2011, was $1.3 billion. That’s insurance payouts, not property damage.

Then there’s the matter of 146,000 Sandy claims that FEMA offered to re-open because of engineering report fraud.

“Flood damage is only going to get worse,” said Sue Marticek, the head of Ocean County’s Long Term Recovery Group, which disburses Sandy aid. “People can argue about the causes of climate change but sea levels are rising and we’re seeing more severe weather.”

George Kasimos began Stop FEMA Now, when post-Sandy flood zones were unveiled. The new FEMA maps put thousands of inland homes, never before flooded, in “VE” zones – the zone most vulnerable to wave impact and the most expensive to insure.

“They were trying to make the money they lost on Katrina off our backs,” Kasimos said, “so we fought them.”

Since its birth in Toms River Stop FEMA Now has either spread or partnered with organizations in 30 states, Kasimos said. True enough, the FEMA program fraud created a ripple effect; people who were short-changed then scrambled for state grants to rebuild, and for rental assistance while they were waiting.

Amanda Devecka-Rinear, the executive director of the New Jersey Organizing Project, agrees a national discussion on FEMA and flood insurance is imperative and wants her organization to demand it.

“We’d like to see them put forth some solutions to make flood insurance affordable so people can continue to live in their homes,” said Devecka-Rinear who followed Christie to Iowa last March to hold up a “Finish the Job” sign.

The question is, will Sandy work for or against Christie.

Will people remember the governor’s compassionate leadership in Sandy-stricken areas as he reassured people they would survive the catastrophe? Or will they focus on the bureaucratic entanglements that led to a stalled recovery?

Will they see him as the guy who pushed hard to restore the tourist towns of Belmar and Seaside Heights, or the guy who took his presidential ambitions on the road and forgot about bay enclaves of Ocean Gate and Beach Haven West?

“I think he’s only vulnerable (on Sandy) among people who are still out of their homes or slow to go back,” said Patrick Murray, the director of Monmouth University’s Polling Institute.

To that point, a Monmouth poll on Sandy’s second anniversary last year showed only 6 percent of hard–hit victims were “very satisfied” with the recovery, while 38 percent were “very dissatisfied.”

“For everyone else in New Jersey, Hurricane Sandy has passed by,” Murray said.

“Everybody’s on to the next thing,” said Al Schupp, who owns a boat rental marina in Highlands. “It’s just yesterday’s news.”

Schupp’s dock and rental office were bashed during the storm, which was nothing new to Schupp, who’s been in the family business his whole life. He did most of the repairs himself.

“There’s so much bureaucracy,” he said. “I applied for one grant, and got $8,400. It was enough to fix about a third of my electric. So, yeah, I’d like to see people talk about running the program run better.”