As FEMA deadline nears, push is on to reach fraud victims | Di Ionno

As FEMA deadline nears, push is on to reach fraud victims | Di Ionno 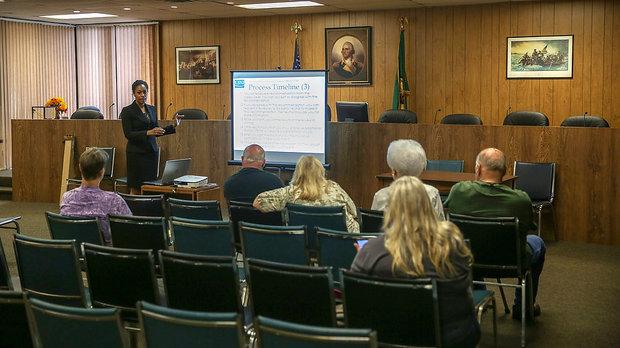 Maryann Flanigan of Legal Services of New Jersey speaks to a handful of residents who showed up for a free Hurricane Sandy flood insurance clinic in Union Beach in June. (Andrew Mills | NJ Advance Media for NJ.com)
PrintEmail

Since March, when FEMA announced it would reopen claims for Sandy victims who believed they were short-changed by flood insurance carriers, there has been a concerted effort to get people on board.

Meetings have been held in town halls, churches, backyards and banquet rooms. Information sessions have been hosted by politicians, law firms, nonprofits and private citizens.

Now, as the Sept. 15 deadline approaches, that effort almost feels like a “get-out-the-vote” movement. There was meeting Thursday night at the Forked River United Methodist Church; another today at Berkeley Township’s rec center.

Sue Marticek, executive director of the Ocean County Long Term Recovery Group, has run sessions as far north as the Union Beach council chambers and as far south as the Cape May Tabernacle United Methodist Church.

“I would encourage any Sandy victim who feels they were lowballed to contact FEMA.” — Sen. Robert Menendez.

George Kasimos, who founded Stop FEMA Now to fight the agency’s post-Sandy flood elevation maps, has hosted information sessions on the patio of a private home, a firehouse, an ambulance station and a café.

The staff of Sen. Robert Menendez(D-N.J.) has held 12 workshops in towns along the Shore.

“There’s been a wide array of groups trying to get the word out,” said Rafael Lemaitre, communications director of FEMA. “What’s interesting is that some of those people were our biggest critics. Stop FEMA Now has been one of our best allies as we try to get people to reopen their claims.”

FEMA said it would reopen claims seven months ago, following evidence that engineering reports were doctored to purposely underpay Sandy victims. Many of the reports blamed soil erosion, not flooding, for damaged foundations or, in some cases, the complete collapse of a home. In other cases, insurance adjusters claimed wind, not water, moved houses off their foundations or leveled them completely.

By March, FEMA decided to send 146,000 letters to homeowners the agency believes had been underpaid by private insurers who carry FEMA-backed National Flood Insurance Program policies. Later, FEMA said it would re-examine any claim, whether people received a letter or not.

Since the initial mailing, there’s been a push to get people to reopen.

It hasn’t been easy.

In FEMA’s last update, published Sept. 3, less than 20,000 people attempted to reopen claims, of which 12,649 are now in the process of being examined. Of those, 556 reviews are complete and 298 cases are closed, meaning either an agreement has been reached or a claim has been withdraw. But only 11 homeowners have actually received checks.

“That’s the number that makes people think, ‘Here we go again,’ ” Marticek said. “If the payments were coming faster, it would be easier to convince people to reopen their claims.”

“We’re slammed,” she said. “Everywhere we go, our appointments (with case managers) are filled and we have 15 to 20 walk-ins. In 90 percent of the cases we review, people are owed some kind of money. We’re telling people, ‘Reopen your claims.’ ”

But there is confusion over some important issues, said Rajan Pandit, of the law firm Wilton & Pandit in Middletown, which specializes in flood and property damage claims. “People remained concerned about clawbacks (having to repay FEMA if they were overpaid), duplication of benefits (having to repay state or federal grants with new insurance money) and substantial damage (thresholds, which might force a homeowner, given more money, to raise a home). There are no clear lines on these issues.”

Also, in the letter to homeowners, FEMA said “1 to 2 percent” of the people thought to be underpaid might actually owe FEMA money if it was found they were overpaid.

“That scared a lot of people off,” Kasimos said. “They figured, ‘I’ve been screwed so many times already, I’ll probably get screwed again.’ ”

Despite the warranted distrust, the message being delivered by everyone from Menendez to charity groups is that the government is ready to make things right.

“I would encourage any Sandy victim who feels they were lowballed to contact FEMA and opt-in on this rare second chance to get what they deserve,” Menendez said by email.

The senator has also asked FEMA to extend the deadline, and a decision on that might come in the next day or two.

Guy Madsen attended a press conference Menendez held in May and decided to reopen his a claim for two properties he ownes in Seaside Heights. A review of his claim will bring him another $13,000 for one property and $22,000 for the other.

Jyll (CQ) Jakes, of Sea Bright, wanted nothing to do with FEMA after battling the agency on several fronts after her home was destroyed. But she was encouraged to reopen by Linda Baker, her Salvation Army disaster case manager, and was offered an additional $18,500.

“We encouraged all our clients to do this,” Baker said. “We felt it was in their best interest to see what was out there.”

National Flood Insurance Program policyholders who want their file reviewed can call FEMA toll-free at (866) 337-4262 or visit fema.gov/sandyclaims. Anyone who had NFIP flood insurance on the date of Hurricane Sandy is eligible.

POLICYHOLDERS ALSO CAN:Download the request form and email it to FEMA-sandyclaimsreview@fema.dhs.gov or fax it to (202) 646-7970.

• Individuals who are deaf, hard of hearing or have a speech disability, using 711 or VRS, can call (866) 337-4262. Individuals using a TTY can call (800) 462-7585.
• Callers are asked a series of questions to determine whether they qualify for review.
• Most reviews will be concluded within 90 days.
• FEMA maintains a webpage with information and updates for National Flood Insurance Program policyholders affected by Hurricane Sandy at fema.gov/hurricane-sandy-nfip-claims