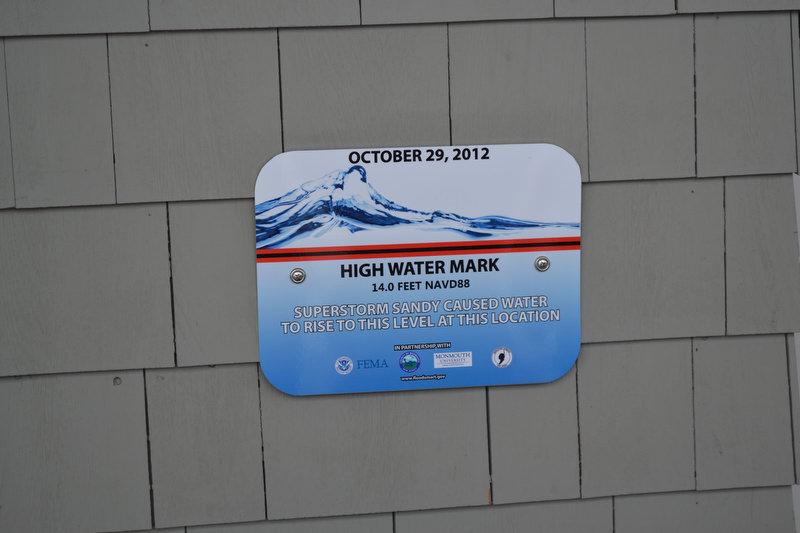 The message will be plastered on approximately 100 signs placed in prominent locations throughout the Shore towns. The signs are aimed to promote awareness about the impact of severe flooding and will also help lower flood insurance premiums for homeowners in participating towns, officials said.

With the Belford Ferry Terminal as a backdrop, Monmouth County Sheriff Shaun Golden and other local, county and federal officials announced Monday morning the launch of the High Water Mark Initiative.

Golden said the signs are one more way the 23 towns along the Jersey coastline in Monmouth County continue to lead the way in responding to the devastating impact of Hurricane Sandy.

“This initiative will constantly reinforce the message that, yes, it can happen again and, yes, we all need to prepare,” Golden said. Local officials from Monmouth County gathered for the training, which focused on crisis decision-making, leader preparedness, crisis communication and mitigation.

Freeholder Deputy Director Serena DiMaso, who is the liaison to the county’s Office of Emergency Management, said this initiative demonstrates the participating towns’ dedication to promoting awareness in the wake of Sandy.

“We have to educate our public to keep them safe,” DiMaso said. “These little reminders will ensure that we preserve our property and, more importantly, our lives.”

The signs are part of a countywide collaboration with the Federal Emergency Management Agency (FEMA) and the National Flood Insurance Program (NFIP). Along with the signs, the 14 participating towns are encouraged to take comprehensive measures to strengthen community resilience against future flooding, such as storm water management projects and building elevation.

Sea Bright Mayor Dina Long said in an interview that a “good number” of homes in the coastal community are now elevated. Because of the elevation, she said the borough would be spared of serious property damage if another Sandy-like storm hit.

“We know the storms are coming, we know the water is coming, and so we want to be able to adapt and learn to live with it, and not have it cause a ton of expensive damage that winds up burdening all taxpayers,” Long said.

The community, however, is not fully recovered yet. Long estimated around 10 percent of primary homeowners in Sea Bright are still displaced by Hurricane Sandy.

“For Sea Bright going forward, it’s critically important for us to always be mindful of what can happen so that everything we do in rebuilding from Sandy is geared toward being able to withstand future extreme coastal storms,” Long said.

The county is still in the process of developing the signs and identifying the locations where they will be placed.

Michael Moriarty, director of mitigation for FEMA’s Region II, said the county has made great progress since Sandy hit in October 2012. But, he said, residents still need to be aware — and remember — the risks of severe flooding.

“We have to remember that many of our neighbors are still picking up the pieces from Sandy and still trying to figure out what the best course of action is,” Moriarty said.