Bennett, regional scientist at the service’s Hadley office, received the award Sept. 7 at the Eisenhower Executive Office Building in Washington.

“It was a total surprise to me and a complete honor,” Bennett said. “It really was the effort of a lot of folks and I accepted it on behalf of everybody. I was just the one lucky enough to be recognized.”

Bennett said he had no idea that he was receiving this award until he arrived at the ceremony.

“They were very cryptic. I was notified that there was an event I had to go to that I was getting some kind of award but that was it,” said Bennett, 59, who lives with his wife Cindy Bennett in Sunderland.

The GreenGov Presidential Awards honor outstanding achievement in the pursuit of President Barack Obama’s federal sustainability goals. They recognize federal, civilian and military personnel, agencies and teams that have gone above and beyond to carry out innovative sustainability projects within the government.

“I’m proud to see the exceptional work of one of our agency’s leading climate adaptation experts recognized publicly by the White House,” Fish and Wildlife Director Dan Ashe said Thursday. 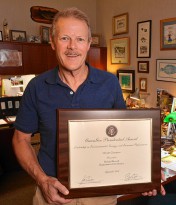 As regional scientist, Bennett guides efforts on topics such as strategic habitat conservation, climate change and national efforts on amphibian and reptile conservation, ocean science initiatives and science coordination across programs and agencies in 13 states.

“The work is challenging but very rewarding,” Bennett said. “Hopefully it makes a difference for the future.”

When Hurricane Sandy struck the East Coast on Oct. 29, 2012, the devastation it left served as a wake-up call that traditional storm protection strategies are no match for the “super storms” of the last decade, and that innovative and sustainable changes were needed.

Bennett led the Department of the Interior response team, overseeing a $167 million project to help revitalize the Northeast and to protect it from future storms and sea-level rise.

During this time, he and his team launched over 100 sustainability-focused projects, and developed performance measurements for climate resilience.

Rather than rebuilding or implementing traditional flood control structures and strategies, like rebuilding seawalls and dams, Bennett and his team focused on restoring natural ecosystems that benefit both wildlife and human communities by focusing on marsh restoration, natural shore protection and aquatic connectivity.

“Natural systems give multiple benefits, while just putting in a bulkhead or a sea wall serves only one function,” Bennett said.

Some of the projects included things such as restoring a natural salt marsh by closing storm related breaches, lowering water levels and doing aerial seeding.

This not only greatly improves flood control and serves as a filter for removal of sediments and pollution from the water, but also protects the salt marsh, environments known as highly productive ecosystems, serving as nursery grounds for many species of birds and fish, and habitat for other animals.

Bennett said the team addressed upstream flooding, by removing dams and improving water flow which not only “gives water some place to go” during storm events but also benefits aquatic habitats, connectivity, and improves fish passage.

To document their work and provide information for other agencies, Bennett’s team also created tools or “metrics” to measure the environmental, and socioeconomic success of the restoration projects.

Bennett said that after three years of work he and his team are now completing those projects and continuing to assess and measure what worked, and how well it worked. He added that he believes that the restorations will be very successful.

“These metrics are changing the way the entire federal government prepares for and responds to severe weather events,” Ash said.

Preparing for climate resiliency is clearly a pressing need.

According to the US Department of Commerce, Hurricane Sandy caused $71.4 billion worth of damage in the U.S. This was the second-costliest hurricane in U.S. history, with Hurricane Katrina topping the list at $108 billion in 2005.

“What we learn can be applied on the landscape in the future. I think we will see a valuable benefit from these tools,” Bennett said.

Bennett has been working for Fish and Wildlife for 27 years and began his career as the chief of the contaminants program at the Annapolis, Maryland, field office in 1989. Since that time he has served as the Northeast Region’s deputy assistant regional director for fisheries, regional director for migratory birds and state programs, and deputy regional director, before being named regional scientist.

“We’re fortunate to have Rick and many other visionary men and women like him working tirelessly at all levels of the service to shape our approach to climate change and other enormous conservation challenges before us,” Ash said.

Other individual recipients of GreenGov awards included: Rosalind A. Grymes, of the National Aeronautics and Space Administration, for enhancing NASA’s sustainability efforts by optimizing the use of water, energy and other resources, and Timothy Currie of NASA for transforming its fleet of over 3,000 vehicles by replacing two-thirds of them with those that run on cleaner fuels, including biofuels, compressed natural gas, and electricity. This transition contributed to NASA achieving a 62 percent reduction in petroleum use since 2005.

By FRAN RYAN
For the Gazette