Posted by Mary Colleen Robinson with - in 2015, Latest News 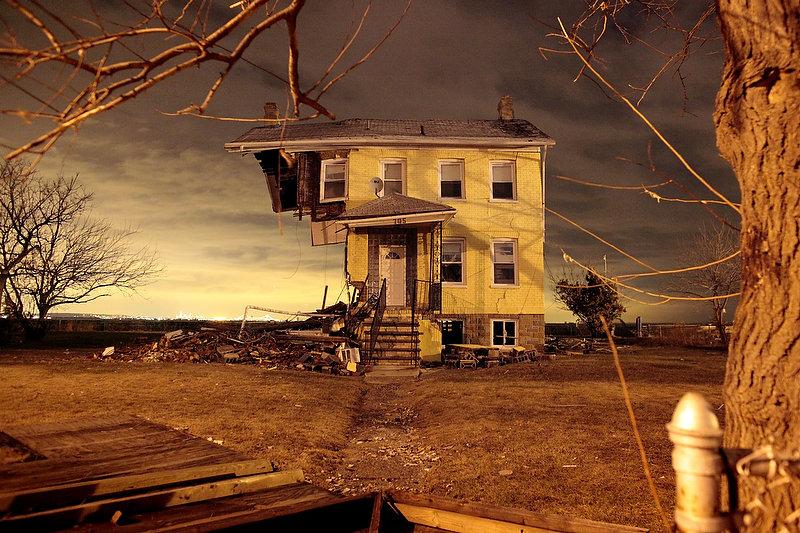 Three years ago this morning, millions of people in New Jersey woke to a gray-sky dawn and the residual breezes of Hurricane Sandy, which rumbled through the state under the darkness of night with the straight-forward power of a slow-moving freight train.

The storm’s wide swath of destruction unveiled itself in the gathering light. The images are impossible to forget.

The roller coaster in the water.

The home in the bay.

Beachfront mansions, broken and toppled, reduced to piles of shingles and cedar shakes.

Boats marooned on highways. Kayaks and canoes used for transportation along city streets.

Utility poles snapped and hanging in a jumble of wires – at the Shore, in the suburbs, in the cities.

Trees in the mountain areas sheared by the hundreds of thousands, snapped by the invisible hand of a howling wind.

From Highlands to the Highlands, this was what New Jersey woke up to.

No electricity, broken water mains and ruptured gas lines, including gas lines above ground, as fuel became scarce. The state woke up to a full-blown, catastrophic disaster.

Then came the long and ongoing recovery, or what many critics call the “the disaster after the disaster.”

Many critics call the Sandy recovery ‘the disaster after the disaster.’

That’s not completely fair. The cleanup was nothing short of amazing. Mountains of debris were piled into bigger mountains and carted away. Power in cities and high-use areas was restored quickly, though much less so in less-populated areas. The underground infrastructure – sewer, water and gas lines – were improved, as were above-ground utility lines.

An estimated 10,000 primary homeowners remain out of their houses today. And FEMA is in the midst of reviewing thousands of National Flood Insurance Program (NFIP) claims in which homeowners may have received low-ball reimbursements due to doctored engineering reports.

Six thousand of the 8,000 families in the state’s Reconstruction, Remediation, Elevation and Mitigation (RREM) are still not home. Nearly 7,000 people dropped out of the program, which has had problems with contractors walking off the job and lots of finger-pointing between them and homeowners over the reasons.

The “disaster after the disaster” remains a recurring nightmare for people in four corners of the state, from the urban areas where the storm surge pushed the Hackensack and Passaic rivers into city streets, to the Raritan Bay-side towns swamped by record tides, to the Atlantic barrier islands lashed by ferocious winds and waves, to the forgotten coast of the Delaware Bay where the storm left island ghost towns in its wake.

Last month, when Hurricane Joaquin made a head-fake toward New Jersey, it exposed how little has changed since Sandy threw the state into chaos.

What follows is a to-do list if we want to protect ourselves from “another Sandy.”

The evidence is empirical. Places with wide, high dunes anchored by plant life did not sustain the same level of damage as places without them. Homes safely tucked behind dunes in Seaside Park got nothing more than a sand blasting. A few hundred yards north, the Seaside Heights pier – holding the JetStar roller coaster – collapsed like a house of cards.

The holdup is the holdouts; the private property owners who won’t sign easements allowing the government to build dunes on their property. It’s a complicated issue, but as long as there is nothing between homes and waves, eventually those homes – and those behind them – are going to get wrecked.

“Mother Nature is going to win,” said Paul Jeffrey, president of the Ortley Beach Voters and Taxpayers Association, which has fought to get dunes built on the 20-mile barrier island that stretches from Point Pleasant to Island Beach State Park. “Eventually, I think the state will get those easements through eminent domain, but the longer we wait, the more the rest of us are at risk.”

This idea, first floated by Gov. Thomas Kean in the 1980s, was reintroduced in an elaborate bill by state Sen. Peter J. Barnes  (D-Middlesex) prior to the 2014 legislative session. It is a forward-looking piece of legislation that demands environmental protection and common-sense regional development plans to protect the state’s most valuable resource. If you read between the lines, the bill could be called “How to Avoid Another Sandy.”

At its heart is the idea that the Shore, like the Pinelands and Highlands, is a shared entity and a unique eco-system that needs better protection. In that, comes the idea that development should be smart and better controlled. How many times do we rebuild on-beach homes and condos before it’s time to stop building on shifting sand?

“I want to see a commission of experts on the environment and in building help guide us to what’s truly best for the area,” Barnes said.

He plans to reintroduce the bill for next year.

Keep trees away from powerlines.

Following Hurricane Irene, the Halloween blizzard of 2011 and Sandy, falling trees were the main reason why it took so long for power to be restored to some areas as hundreds of miles of lines were downed. Since Sandy, JCP&L alone has spent $73 million on trimming trees back from power lines, according to spokesman Ron Morano. The result? A steady decline in tree-related outages. In 2014, they fell another 22 percent.

Fix FEMA, once and for all.

With sea levels rising, up to 130 million Americans living on coastlines, why isn’t this a presidential campaign issue?

How many Katrinas and Sandys have to transpire before some smart administration figures out the National Flood Insurance Program is a disaster. The massive overpayment and fraud after Katrina is well-documented, as is the massive underpayment and fraud following Sandy.

“The No.1 reason we are not further along in the recovery is the National Flood Insurance Program,” said Sue Marticek, the executive director of the Ocean County Long Term Recovery Group. “The systematic underpayment to homeowners cut the recovery off at the knees.”

Sen. Robert Menendez (D-N.J.) believes there are too many state and federal agencies involved in the recovery, wasting billions of tax dollars and precious time, and leaving displaced and traumatized people to fill out endless forms and supply infinite documentation to get help. The communication between FEMA and these agencies bogged down, and victims often had a hard time accessing information. And  FEMA’s “go online” suggestion isn’t the solution, especially when people lost their computers in the storm or didn’t have one to begin with.

“We need to make sure that government is responsive to the people’s needs and is there to help, not make lives more difficult,” Menendez said in an email this week.

There is this enduring image from Union Beach: As Mennonite girls from Ohio wearing dust masks were ripping moldy wallboard out of homes, teen members of FEMA’s Corps program were gingerly stepping over debris in their clean, blue windbreakers.

This is not to disparage those FEMA kids, but some agencies act and others talk about acting. By the weekend after Sandy, 50,000 church-related volunteers were in New Jersey with food, clothes, water, tools and 100,000 sets of hands to help with the clean-up.

Fast forward deeper into the recovery, and trusted, local nonprofits such as Catholic Charities and the Salvation Army became the sole advocates for many people.  Boots-on-ground agencies, like the Ocean County Long Term Recovery Group, serve as the point of entry to many services, from financial help to psychological counseling to even pet care.  They understand the local needs better than Washington.

Listen to people who know what they’re talking about.

Jeffrey Major of Cherry Hill, has worked as an insurance adjuster and claims consultant on every major American disaster since Hurricane Andrew in 1992. He submitted an extensive white paper to state and federal officials after Sandy about the evidence and repair costs of flood damage. No response.

Lou DiGeronimo, who helped write New Jersey’s uniform building code, submitted plans to the state for six hurricane-resistant recovery house models using uniform pieces that could be built for $135 a square foot – about $50 less than the going rate. No response.

These are just two examples of experts left out of what could be important discussions to create a playbook for future disasters.

And there is one more collective voice that should be heard as well: the victims.

“Sandy survivors need a real say in the recovery process,” said Amanda Devecka-Rinear, executive director of the New Jersey Organizing Project, which formed to give a voice to hurricane victims. “They’re living it day to day, they are the experts. What’s happening now is, decisions are being made about them – without them.”