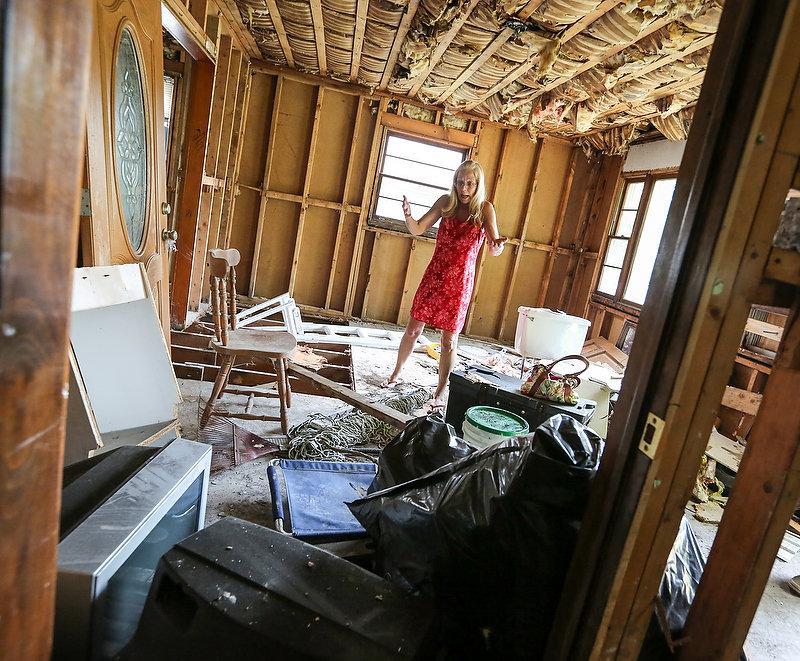 Joan Wujcik becomes emotional as she finds bags of mold-encrusted construction debris and an oil drum dumped inside her still-wrecked home in the Gifford Park section of Toms River Township. Wujcik and many other New Jersey residents continue to struggle to get back on their feet almost three years after Hurricane Sandy destroyed their homes. 6/23/15 (Andrew Mills | NJ Advance Media for NJ.com)
Andrew Mills | NJ Advance Media for NJ.com
As we move deeper into the third summer after Sandy, the crushing effects of the storm have been forgotten by people who don’t live where wrecked homes and broken hearts still overwhelm the landscape.

Nearly 9,000 families in the state’s Reconstruction, Rehabilitation, Elevation and Mitigation (RREM) program are not in their primary homes.

The truth is no one knows the real number.

“For every one of our clients in the RREM, we have at least one not in the program,” said Sue Marticek, head of Ocean County’s Long Term Recovery Group, which disburses aid from a variety of funds. “I’d say, conservatively, there are 20,000 families out of their primary homes.”

I went from being a homeowner and manager of a restaurant to being a homeless, unemployed bag lady.” — Joan Wujcik

The evidence along the Raritan Bay is in the bungalow neighborhoods of Union Beach, Keansburg and Highlands, where the whine of saws and bang of hammers resound on every block. .

On Barnegat Bay, the waterfront sections of Brick and Toms River, tell the story. These are places where people grabbed their little piece of affordable paradise on lagoons or quiet grassy marshes, where vacant, boarded-up homes still make up a quarter of the housing stock.

These places are not the beach and boardwalk towns of Belmar and Seaside Heights, where Gov. Chris Christie held events with local officials to announce the Shore was back in 2013.

They are not Bay Head and Mantoloking, where post-Sandy pictures of oceanfront mansions –flipped on their sides or reduced to heaps of timber and shingles – gave the lasting impression that most storm victims were millionaires with beachfront homes.

The following cannot be stated emphatically enough: The Shore is nowhere near fully back and most Sandy victims are middle-class families or retirees.

“I’ve worked hard my whole life,” said Joan Wujcik, standing in the wreckage of her house in Toms River. “I went from being a secure, independent woman homeowner and manager of a restaurant to being a homeless, unemployed bag lady because of this storm.”

Gert Sofman opened up an organic food shop in Highlands, a few blocks from her home, three months before the storm. Both were destroyed.

“I invested $70,000 of my own money into this business,” she said. “Now, I can’t get loans to rebuild because I didn’t show enough income. I was only open for three months! Are you kidding me?”

The fact that Wujcik is fighting foreclosure on her destroyed home and Sofman can’t borrow to rebuild her business leads to another unavoidable truth: For too many people the recovery has been a second disaster.

Homeowners are bound in red tape, or stuck in a bureaucratic game of federal, state and local three-card monte. Plan approvals and building permits are done by the book in many places, as if no storm had occurred. Banks and utilities also move at a non-emergency pace. For more aggravation, please press 1. For a nervous breakdown, please press 2.

Lee Caruso’s house in Union Beach is just now being demolished by volunteers. Her RREM grant says she has until August to rebuild. Part of the delay in getting the house knocked down was that the gas company took nine weeks – nine weeks! – to send a letter saying her line was disconnected.

“I’m never going to make it, so I have to file for another extension,” she said.

In many cases, people were forced to apply for RREM grants only because of fraudulently low flood insurance payouts. FEMA is re-opening 146,000 claims, but the ripple effect – in terms of wasted time, money and emotional stress – is immeasurable.

Wujcik got $37,000 from flood insurance, not nearly enough to repair and raise her house. She applied to RREM, but said her paperwork got lost. Anxiety and depression followed. Her aged mother, who was supposed to move in with her, still can’t.

“Neither of us have anything now,” she said. “This is the American Dream? For who?” The Horezga family: Andrew, 33, and Theresa, 26 return to the boarded-up South Amboy neighborhood they grew up in with their mother, Mary, who lost the family home during Hurricane Sandy. They have still not been able to rebuild. 6/24/15Andrew Mills | NJ Advance Media

“Nobody seems to care what’s happened here,” said Mary Horezga, who said her hair turned from all brown to all white in a matter of days.

“It didn’t even go gray. Just white,” said Horezga, now living in a third-floor walk-up in downtown South Amboy. Her FEMA claim, which paid $98,000 for her seven-bedroom, all-brick Victorian valued at $550,000, is being re-opened.

She and Wujcik, like many Sandy victims, have paid an incalculable emotional and physical price while waiting for the recovery. Both said they have post-traumatic stress disorder and undergo counseling. Wujcik takes medication to sleep and to control her anxiety and depression.

“I never got sick in my life ’till this,” Wujcik said, adding that she’s “aged 10 years” in the last three.

“How do you get those years back?”

Horezga lost more than her home, she lost her neighborhood. Next to the vacant lot where her home once stood are two empty houses.

On one side, a couple left their house to rot. On the other, a man died as he cleaned the raw sewage out of his home. Across the street is a boarded-up market and a deserted apartment complex.

“I don’t want to come back, but I have no choice,” said Horezga, whose family has launched a funding site (gofundme.com/MarysMiracle) to get her home rebuilt. “Nobody wants this land now. All my memories here are gone.”

Gloria Culos puts it this way: “I felt like I was in the witness protection program. Nothing that showed who we are or where we’ve been was left. My whole identity was gone.”

Her small house, in the Drum Point section of Brick, was destroyed and she was given a $39,000 insurance settlement.

Culos and her husband, Al, were sharing the home with their recently widowed daughter and her four children.

“We lost everything,” she said. “The kids lost their father in March, and everything they owned in October.”

“They lost everything and I lost her,” said another daughter, Theresa Josa. “For 10 months, she was gone … I’d ask her a question and she’d start crying.”

For thousands of people, those tears are still coming. It’s the third summer after Sandy and,in the places far from the weekend crowds and the carnival lights of the boardwalk, life is no day at the beach.