More than 300 Sandy-affected homes in Monmouth and Ocean counties slipped into foreclosure during the first 10 months of 2014.

Hundreds of families forced from their homes during superstorm Sandy now face a new tempest: foreclosure on the properties they are struggling to rebuild.

An Asbury Park Press analysis has identified 305 Sandy-affected homes in Monmouth and Ocean counties that have been pushed into the property-seizure process during the first 10 months of 2014.

Of the 305 homes in foreclosure, 134 incurred some level of damage or inundation, the Press found. The remaining homes were found to be within the flood zones, which could have dramatically altered neighborhoods, affected property values and spurred foreclosure.

Experts say the glut of foreclosed homes in New Jersey makes it difficult to quantify what impact the devastating October 2012 storm had on borrowers’ ability to stay current on their mortgages. But they agreed Sandy definitely plays a part in the ongoing foreclosure crisis in the Garden State, which by percentage has more distressed properties than any state in the nation.

TOMS RIVER – Ocean County’s Long-Term Recovery Group is seeking $20 million in funds for a coordinated program that it says can help get more Sandy victims back into their homes.

The group is an umbrella organization of more than 80 nonprofits that has worked to provide money and volunteer labor that helps fill gaps between a homeowners’ resources and the actual cost of rebuilding. The recovery group recently submitted its request to the state Department of Community Affairs, and is seeking money from the $502 million New Jersey is slated to received in the third round of federal Sandy recovery funds.

It is asking for the $20 million to be distributed over the next two years.

Ocean County Sandy victims’ plea: Help us get back home

TOMS RIVER – Frances Accardi has been living in an uninsulated travel trailer on her Toms River property since shortly after Superstorm Sandy flooded her ranch home with 5 feet of water, forcing her to have it demolished.

On Tuesday Accardi, who is still trying to rebuild her house, came to a hearing on the state’s plans for $502 million in federal storm aid to beg New Jersey officials to do a better job getting people back home.

“We are reaching out to you because we don’t know which other way to turn,” said Accardi, who lives in Toms River’s Silverton section, which was badly flooded during Sandy. “The people who don’t have a house to live in should be the first to be addressed.” 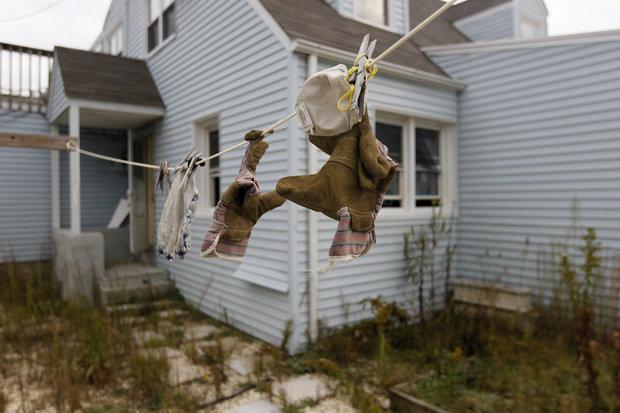 New Jersey officials today held a public hearing in Toms River on the state’s plan for spending the third and final round of federal Hurricane Sandy disaster relief aid. Here, work gloves hang from a clothes line outside of an unoccupied home still in repair in the Ortley Beach section of Toms River, two years after the storm ripped through the state. (Patti Sapone | NJ Advance Media for NJ.com)

TOMS RIVER — The state plans to spend most of the half billion dollars in Hurricane Sandy recovery funding allocated to New Jersey in the final round of aid from the federal government on affordable rental housing programs and grants for people who want to rebuild.

But residents who spoke at a public hearing today in Toms River on the state’s plan to spend that money said officials haven’t done a good enough job distributing the money New Jersey has already received. Many expressed continued frustration with the pace of rebuilding programs, saying the protracted recovery has left them drained.

“We’re all hurting financially, medically, physically, every way you can think of,” said Denise Vaccaro, a Forked River resident who is renting in Beachwood as she waits for her home to be rebuilt. “We need help. We need help desperately.”

Vaccaro said she has been preliminarily approved for a grant through the state’s largest rebuilding program, which she described as unresponsive and difficult to navigate.

The four-person panel of state officials listening to residents’ comments at the meeting included Terrence Brody, the executive director of the Governor’s Office of Recovery and Rebuilding and Melissa Orsen, the deputy commissioner of the state Department of Community Affairs. Neither were available for comment following the hearing.

Tammori Petty, a spokeswoman for the Department of Community Affairs, said officials would address the concerns raised during the hearing, giving “individualized attention to each comment.”

The Reconstruction, Rehabilitation, Elevation and Mitigation program, which is known by its acronym, RREM, provides up to $150,000 for storm-related repairs.

The state plans to funnel $225 million from the nearly $502 million New Jersey is receiving from the U.S. Department of Housing and Urban Development in a third round of funding to the RREM program.

The state also plans to transfer $5 million from a post-Sandy tourism marketing campaign and $25 million from a program to help cover the cost of matching funds to use for the housing grant program.

With that additional funding, the state plans to help the fewer than 2,000 people who have are still waiting for a grant through the program.

Of the $1.1 billion dedicated to the fund in the first two rounds of funding, the state has disbursed more than $436 million as of today and 328 homes have been completed.

“The RREM program is broken folks,” said George Kasimos, a Toms River resident and the founder of the grassroots group Stop FEMA Now. “There’s no help.”

“This is the first time New Jersey has dealt with this,” Petty said when asked about residents’ ongoing problems with the state-run program. “It’s long-term recovery.

In the three-hour long meeting today at Ocean County College, residents said the state should send funding to organizations like the Ocean County Long Term Recovery group. That group, residents said, has helped them more than any government program.

“They know our personal circumstances and we are not a randomized lottery number to them,” said Margaret Quinn of Toms River, who said she was approved and then wrongly denied a grant through the RREM program.

In addition to the additional funding for the rebuilding grant program, the state’s plan calls for putting another $215 million into a fund for affordable rental housing. A settlement reached between the state and advocacy groups that filed a complaint charging the Christie administration with unfairly distributing disaster recovery funds called for allocating additional funding into that program.

The settlement also sets targets for directing that funding to the most impacted communities.

The state’s plan also sets aside $10 million for a fund to repair or replace housing for individuals with special needs and $15 million for additional tenant‐based rental assistance.

Another public hearing is scheduled from 4 p.m. to 7 p.m. on Wednesday in Bergen Community College’s Moses Center at 400 Paramus Road in Paramus.

Written comments on the plan, which can be emailed to sandy.publiccomment@dca.nj.gov, will be accepted through Jan. 15.